How many pictures does it take until there is a perfect shot?

The success rate varies from session to session and model to model and oscillates between 1 and 100%. Luckily, when working in a digital medium there is no penalty or cost associated with taking any number of missed shots. I don’t know if I’d call those that pass the muster “perfect” though – some might be asymptotically approaching that ideal, but I have yet to take the perfect photo. 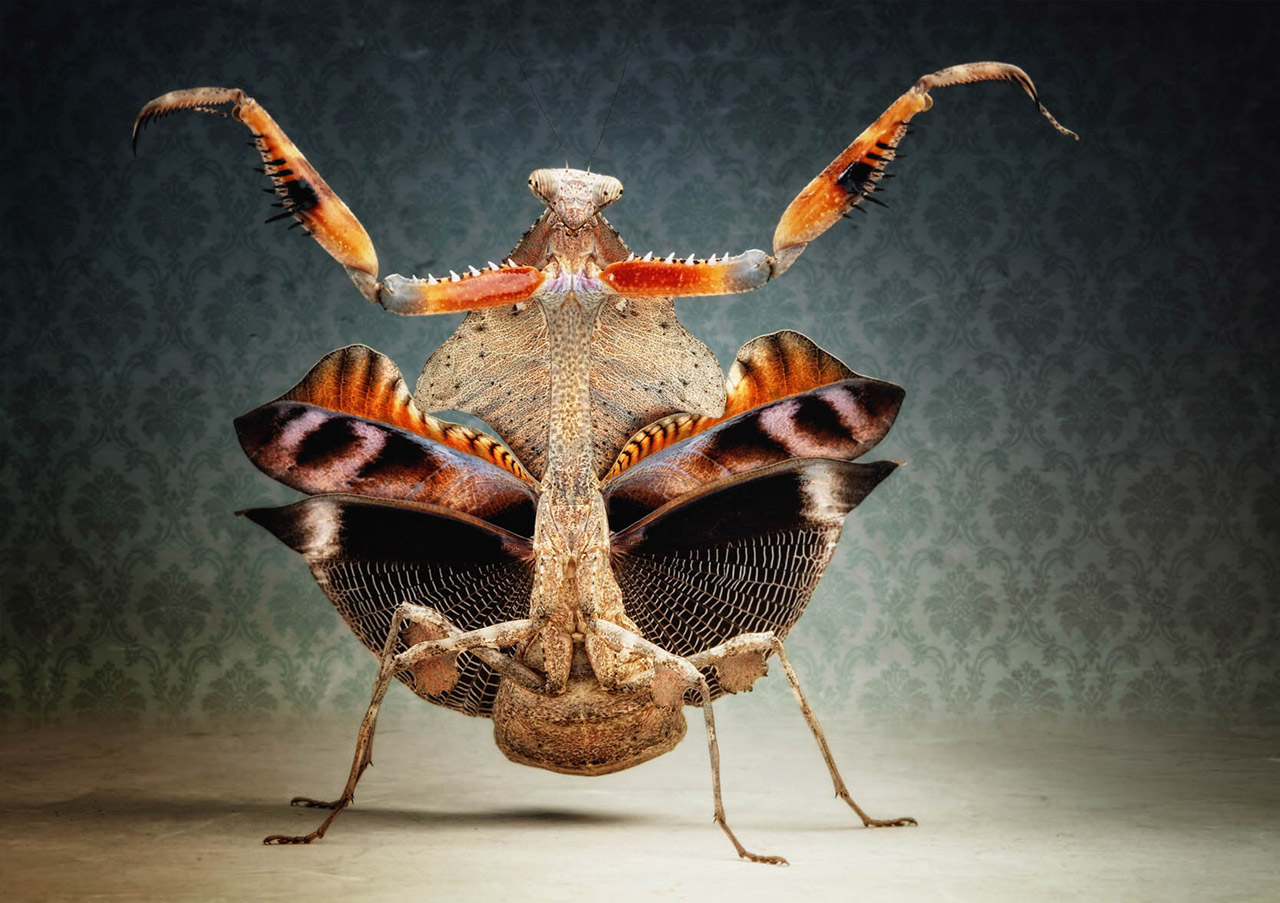 From nature into the living room:"The feedback I am often receiving indicates that I actually managed to convert some insect-phobic folks, apparently!"

Do you have a favourite motive, a plant or an animal, that you enjoy taking photos of most?

Praying mantises are by far my favourite insect models. They have certain unique qualities that set them apart from other insects and make them special. An ability to rotate the head, large, dome-shaped eyes sporting a pair of pseudo pupils (those dark spots that seem to follow you), grasping front legs used to manipulate the captured animals and in grooming, give them strangely anthropomorphic and at the same time otherworldly appearance. They come in all various shapes and colours; some may be disguised as a flower, a dry or fresh leaf or a twig. When their near-perfect camouflage fails and they are discovered by a bird or cat, mantises still have a plan B – a threatening display aimed at confusing the oppressor. The insects rise their brightly coloured front legs and wings, demonstrating contrasting patterns or eye spots, and seem to double in size. Those displays are when mantises really shine.

The combination of an alien-like appearance of a mantis with certain qualities of a fairy or a butterfly seems to cause cognitive dissonance in some viewers, and that is usually enough to capture their attention for a moment. The dramatic poses also seem to invoke many pop culture references (think ‘Time warp’, ‘Karate kid’ etc.); I think that makes it easier to relate to the insects in the photos. Bringing my “models” at the face-level with the viewer has also another effect – presented from their own perspective and taken away from the context of their natural environment, the animals acquire anthropomorphic qualities, personality and charm.

The feedback I am often receiving indicates that I actually managed to convert some insect-phobic folks, apparently! And then there are those that decided to ink some of my photos into their skin - it is an ultimate prize for every artist. Unfortunately, I’m not in touch with any of the individuals that chose to wear my images on their bodies.

My favourite plant “model” thus far was a humped bladderwort, which sounds like something from Harry Potter, but in fact is a carnivorous freshwater plant common in local ponds. Perhaps it is the perversion of the role reversal when a plant is devouring an animal that makes flesh-eating plants so interesting; I have been fascinated with carnivorous plants since early childhood – watching “Little Shop of Horrors'' might have something to do with igniting my fascination. The aquatic bladderwort was, at first glance, far less spectacular than, say, a Venus flytrap or a pitcher plant; it is able to tackle only minute prey like water fleas and copepods, so it wasn’t high on my Close Encounter wish list. Little did I know about the complexity the bladderwort’s trap reveals when magnified. In fact, it is considered the most sophisticated trapping organ in the plant kingdom, a true testimony to evolution’s ingenuity. Very often our consciousness translates the functionality of natural forms into beauty, and the trap is a good case in point.

Bladderworts are known to have an intimate relationship with single-cell green algae called desmids; the order Desmidiliaes comprises more than 8000 species worldwide, exhibiting a vast diversity of shapes and sizes. So, finding the bladderwort came with the bonus of stumbling upon those beautiful algae. I became immediately obsessed with them, a phenomenon known among microscopists as “desmid twitching” and characterized by the compulsion to take water samples from every pond I encountered.

Is there something special that you would like to photograph in the future?

The only thing that comes to my mind right now is a coconut crab… I would love to travel to some biodiversity hotspots, while they are still doing okay, such as Madagascar, Borneo, Costa Rica etc. Because of the pandemic those goals need to be put on hold, of course, and who knows for how long – I am not holding my breath. For now, I would be satisfied with visiting the American south again, I love the desert ecosystem and its inhabitants. I would like to meet the desert horned lizards on their own turf.

to the previous page