he designers of Europe’s great cathedrals were masters of their craft. An example of their eye for detail can be seen in Strasbourg Cathedral on two occasions each year, when a green beam briefly lights up a prominent sculpture of Christ.

In Strasbourg’s imposing medieval cathedral, a mysterious green sunbeam illuminates the crucified Christ depicted on the pulpit in the nave for a short time around the spring and autumn equinoxes. The effect has generally been viewed as unintentional, but a new book by Oliver Wiessmann, a specialist in medieval iconography and symbolism, argues that it is the result of careful planning. He contends that the sightline between one of the stained-glass windows above the nave and the pulpit was deliberately chosen so that the figure of Christ would be illuminated when the Sun crosses the celestial equator.

A little before 12.30 PM on September 22nd 2018, the green beam will traverse the nave and successively illuminate the sculptures of the crucified Christ and several neighboring figures on the Late Gothic pulpit, which dates to 1485. On the winter solstice, a beam of white light passes over the same group.

The green beam appears when sunlight passes through one of the panels of the stained-glass window dedicated to Juda, one of the sons of the Old Testament patriarch Jacob. Juda is wearing green shoes, to which he helpfully points. The green light falls on the statue for about 20 minutes on each occasion. The link with the equinox was first noted by Maurice Rosart, a local surveyor, in the 1970s. He suggested that the effect might have served as a time standard for the Cathedral’s first astronomical clock, but this hypothesis has been generally rejected.

Wiessmann’s new book now argues that the disposition of the sightline was planned by the Cathedral’s mediaeval architects. Careful orientation of ecclesiastical buildings was indeed the normal practice, and intentional lighting effects can often be identified in such structures. “In the Middle Ages, the master masons formed a closed and tightly knit caste, and they possessed sovereign power,” the author writes. “Moreover, they cultivated a body of knowledge that is now referred to as ancient theology,” in which celestial and seasonal cycles played an important role.

The desire to fix and mark astronomically significant dates, such as the equinoxes, and the use of astrological symbolism in ecclesiastical structures was therefore quite natural for the master architects of the Middle Ages. That this also applied to those who designed and built the Cathedral of Our Lady in Strasbourg is indicated by many iconographic details of the richly decorated façade of the West Portal. Wiessmann also finds references to the green sunbeam in a document associated with one of the original design sketches for the pulpit.

In addition, he points to the fact that the main axis of the Cathedral is not oriented East-West as would be expected, but deviates from this by 30°. Wiessmann suggests that the architect might have chosen this unusual orientation, which coincides with the position of the constellation Virgo, as a pointed reference to the Virgin Mary, to whom the building is dedicated. 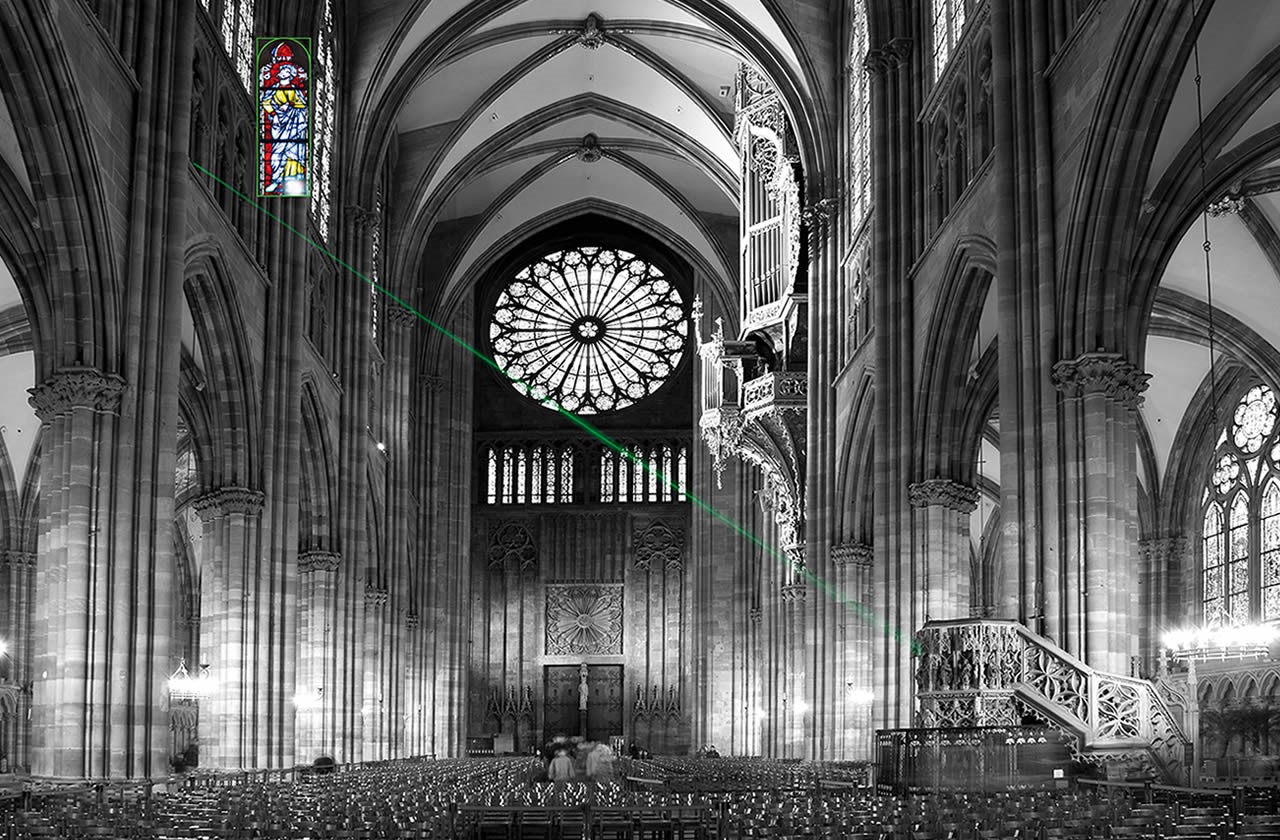 Indeed, the otherwise puzzling orientation of the church itself is ultimately responsible for the fact that the sunlight can illuminate the pulpit on the equinoxes, and that white light falls upon the same figures on the winter solstice. As further support for his thesis, Wiessmann cites references to the green beam in the writings of Johann Geiler von Kaysersberg – the theologian for whom the pulpit was erected – as evidence that the phenomenon was already a feature of the Cathedral in the Middle Ages. He therefore claims that there persuasive grounds for assuming that the green beam is not the result of pure chance.