esearchers led by Norbert Scherer from the University of Chicago have developed a nano-machine that is constructed and operated by laser light. The engineers placed silver nanoparticles in water and directed a laser beam at the particles. From the nanoparticles, the light independently constructed a gear and set it in motion.

Light and matter have a profound relationship. They interact in many different ways. Light induces molecules to vibrate, kicks electrons out of atoms, or may, in the future, even propel nano-light sails in space through its pressure. But light can also do work in the nanocosmos. This has now been impressively demonstrated by engineers led by Norbert Scherer from the University of Chicago with a novel nano-gearbox. They show how nanotechnology can be used to convert light into mechanical energy. The nano-gears are based on the interaction of a laser light field with metal particles. The interaction causes the particles to assemble into ordered structures. This is a similar principle to that of optical tweezers, which use light to hold and manipulate particles, biological molecules and cells. 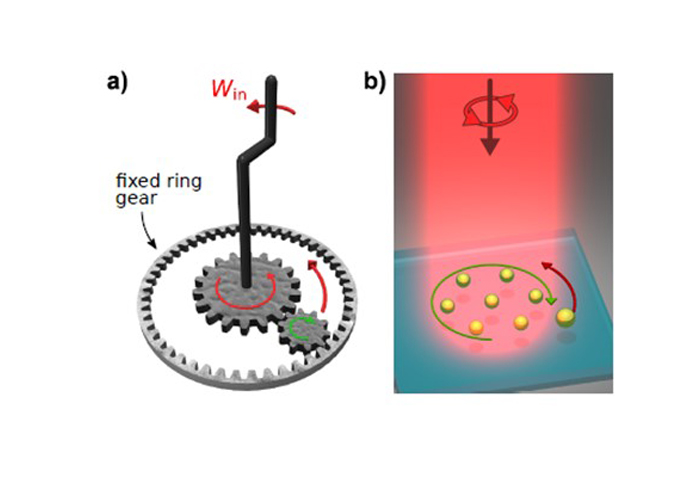 Researchers created an optical matter machine that operates much like a mechanical machine in which if one gear is turned, a smaller interlocking gear will spin in the opposite direction (a). The optical matter machine (b) uses circularly polarized light to create a nanoparticle array that acts like the larger gear by spinning in the optical field. This makes a probe particle – analogous to the second smaller gear – orbit the nanoparticle array in the opposite direction.

To construct the nano-machines, the researchers placed silver nanoparticles with a diameter of 150 nanometers in water. As soon as the circularly polarized laser light with a wavelength of around 600 nanometers hit them, the floating particles arranged themselves into a structured mini-gear as if by magic.

"Both the energy for assembling the machine and the power to make it work come from light," explains Norbert Scherer. As soon as the laser light is introduced into a solution containing nanoparticles, the process runs by itself. "Although the user does not need to actively control or direct the outcome, this could readily be done to tailor the machines for various applications," says Scherer.

The researchers thus created an optical matter machine that functions in a similar way as a mechanical one based on intermeshing gears. When a gear wheel is turned in the mechanical system, a smaller intermeshing gear wheel turns in the opposite direction. The optical matter machine consists of a nanoparticle array that acts like a large gear wheel and rotates in the light field. This causes another particle, analogous to a second, smaller gear wheel, to orbit the nanoparticle array in the opposite direction.