In ultra-short time physics, simulations are an important tool to verify experimental results. This simulation shows what happens when particles, which are separated from a molecule by two time-delayed laser pulses, fly apart. The image shows their kinetic energy as a function of the time interval between the two pulses.

he gaze into the stars is as old as mankind. Early on, people tried to interpret formations of stars as constellations, to name them after figures from mythology or to read the signs of the zodiac into them. But also the view into the subatomic area, which in the sum only makes up the whole, is fascinating and has become possible thanks to laser research. Let's look like young stargazers at images from the nanocosmos beyond the factual from a purely aesthetic and creative point of view. Science can become art here.

Against a blue-monochrome background, one of the images shows two cornucopia-like structures that are joined together as a pair of wings. The inward and outward swinging shapes consist of a coarse-grained structure that sometimes lets the background shimmer through, captured at the edges by pixels of bright green. The grainy texture may remind of Tibetan mandalas. These are elaborately designed geometric-ornamental patterns of colored grains of sand, which are swept together and deliberately destroyed after their meditative process of creation. In their ephemeral appearance mandalas express the fleetingness of an instantaneous state of existence, just as it is the case with measurements in research after lengthy preparation. Like a picture puzzle, the curves of the form simultaneously create negative forms in their recesses. Thus, below the two buildings, one sees a parabola-like conical section above which a semicircular structure hovers, like the schematic representation of a mountain over which the sun or the moon appear to be standing. 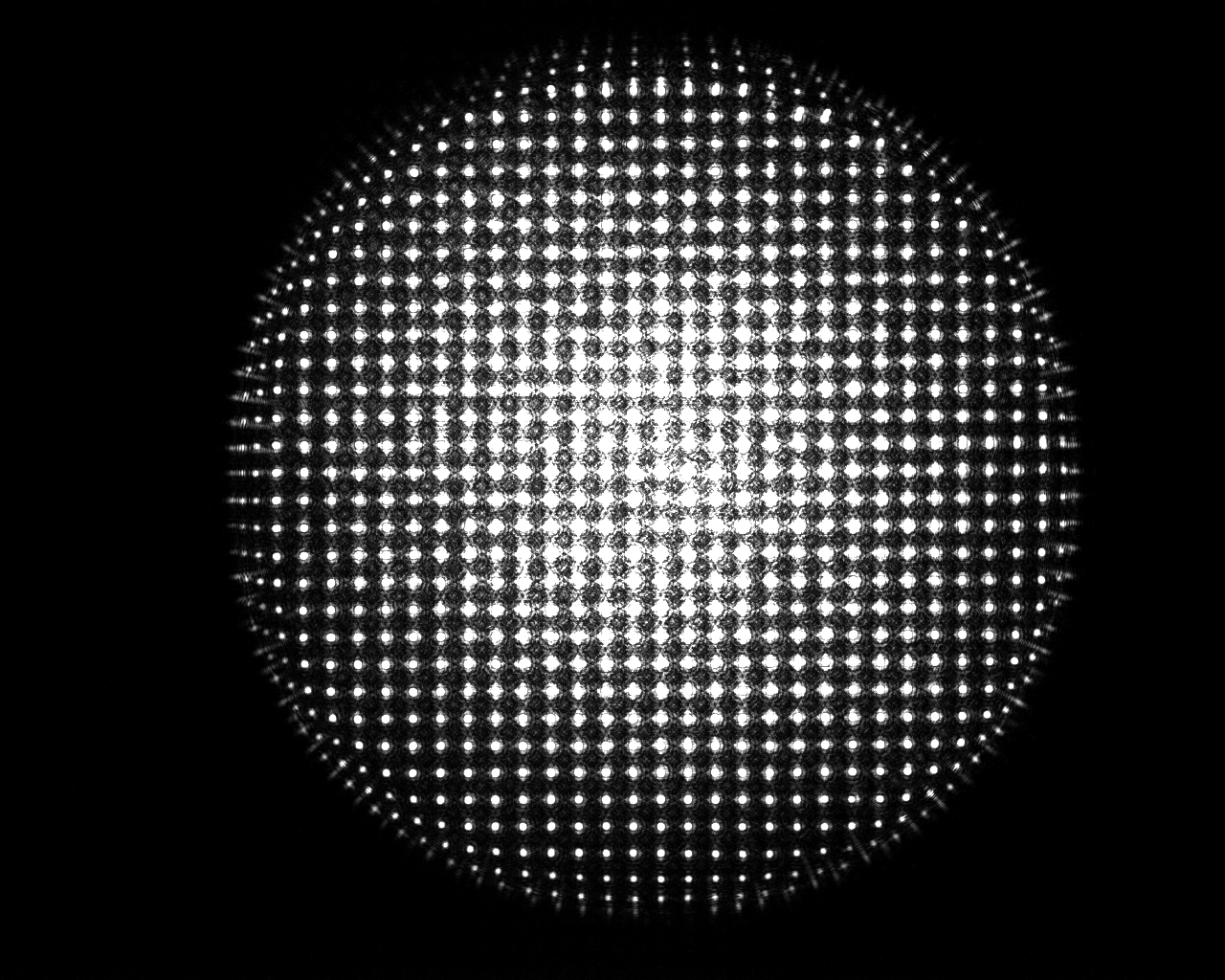 The picture shows a Shack-Hartmann wavefront sensor (consisting of a microlens array and a camera) illuminated by a round laser beam. The distortion around the edges indicates the presence of spherical aberrations. Picture: Leonard Doyle

Another depiction shows a spherical body formed by numerous glittering dots against a black background, which looks like a nail sculpture by the German artist Günther Uecker. Illuminated by a central light source, from a distance the structure resembles a mirrored disco ball. Even in antiquity, the sphere was considered the perfect form, symbol of constant renewal and eternity, also or precisely because perfect symmetry does not prevail in visible nature. 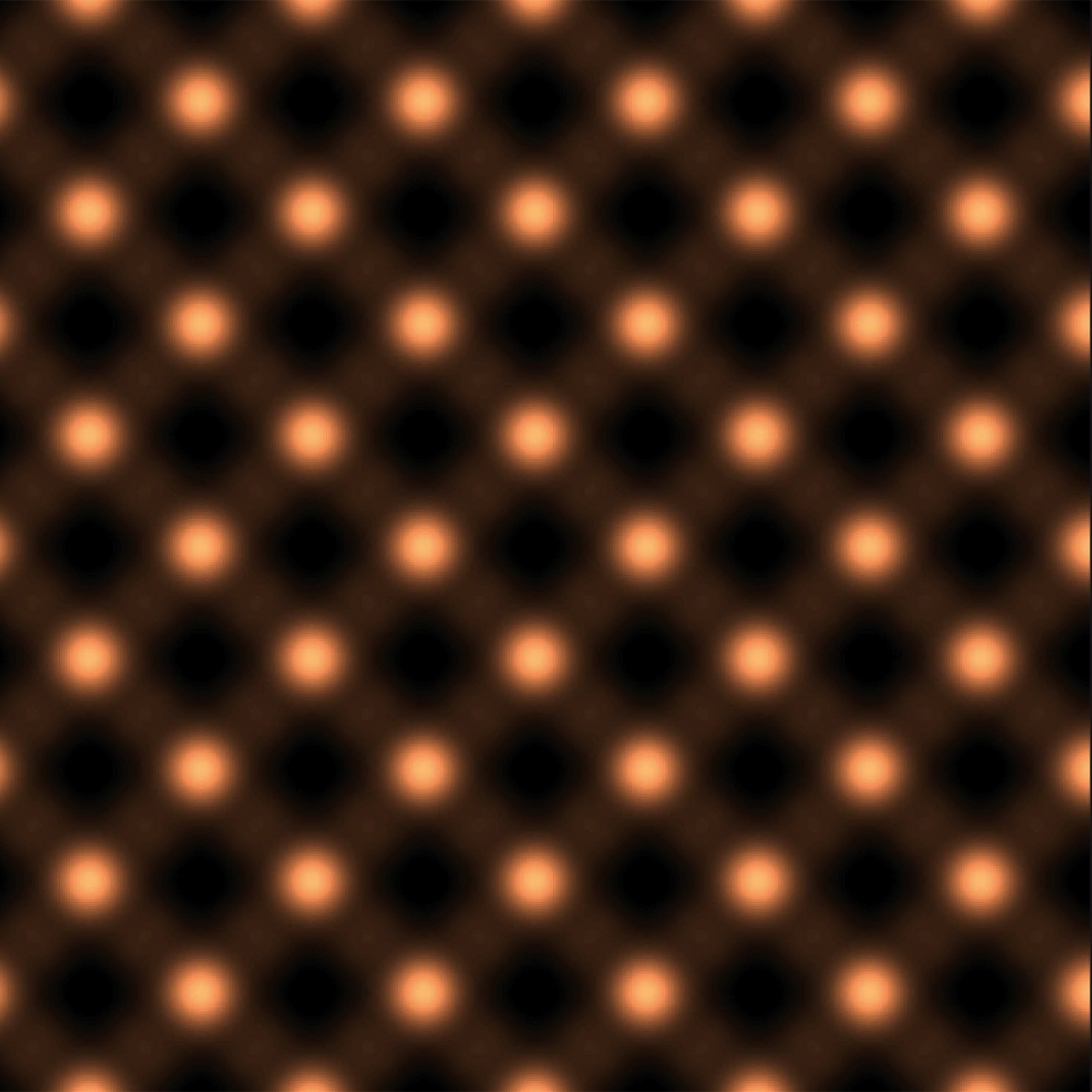 The picture shows the structure of the crystal CaF2 taken with the picoscopy technique of the team around Prof. Eleftherios Goulielmakis. The bright spots are calcium ions, the dark bridges are florine ions from one of the crystal planes.

Another graphic representation of a measurement is reminiscent of a deliberately veiled photograph of diagonally arranged bars with dimmed light bulbs. It shows only a section, because it is trimmed at the edges, and suggests a principally infinite continuation of this geometric pattern. The underlying ordered structure of x-shaped components and diamond-shaped hollow forms, which add up to and condense into ornamental patterns, results in a portrait of perfect harmony and meditative calm in interaction with the lighting mood created, while at the same time providing a mysterious insight into the beauty and nature of material structures.

The picture shows a spectrogram of vibrating molecules emitting a coherent electric field after being excited by a few-cycle infrared laser pulse.

A portrait of special abstract quality is the last example. In richly nuanced dissolving color gradients, which cover the visible color spectrum from violet to red, like the chromaticity of a rainbow, a picture emerges, which associatively evokes the pathos of an evening light mood over a vast desert landscape with a suggested water source. The abstract play of colors, which superficially celebrates the intrinsic value of colors detached from the actual object, is all the more impressive because it is the product of an imaging procedure that refers to states of electromagnetic wavelengths and thus, in the true sense of the word, represents concrete phenomena of nature.