Even today, infrared laser spectroscopy can be used to infer the molecular composition of blood. In the future, it may be possible to infer diseases such as cancer at an early stage, when most of them are still curable. | © Image: Alexander Gelin

From Science Fiction to High-Tech Photonics

hen the first functional laser was developed in 1960, one had very little idea of the range of applications that such high-intensity beams of tightly collimated light would one day find. Today it is impossible to imagine today’s world without the laser. Lasers are now ubiquitous in consumer electronics, telecommunications, measuring devices, in industry, medicine and research. They have also become an indispensable tool in space research. And there is no sign that the laser will run out of useful things to do. Indeed, specialists believe that the 21st century is set to be the century of the photon, the smallest unit of light.

Theodore H. Maiman introduced the world’s first working laser to the press and the public in New York City on July 7, 1960. Reports in the newspapers next day were almost unanimous in viewing the new technology as the first practical realization of the deadly ray-guns that were a familiar feature of science fiction at the time. Indeed, the prescience displayed by the visionaries who first conceived the idea of concentrating light and described the properties and potential applications of tightly collimated light beams is quite astonishing. During the siege of Syracuse in Sicily in 212 BC, the Greek mathematician Archimedes is reported to have used mirrors made of bronze or glass to focus the Sun’s rays on Roman ships with the aim of setting them on fire. In his book New Atlantis, published in 1627, the English philosopher Francis Bacon prophetically wrote of a future society whose primary purpose was to acquire and exploit “knowledge of the causes and secret motions of things”. To this end, its rulers had set up what we would now call research establishments. These included ‘perspective houses’, in which “we represent also all multiplications of light, which we carry to great distance, and make so sharp as to discern small points and lines.” 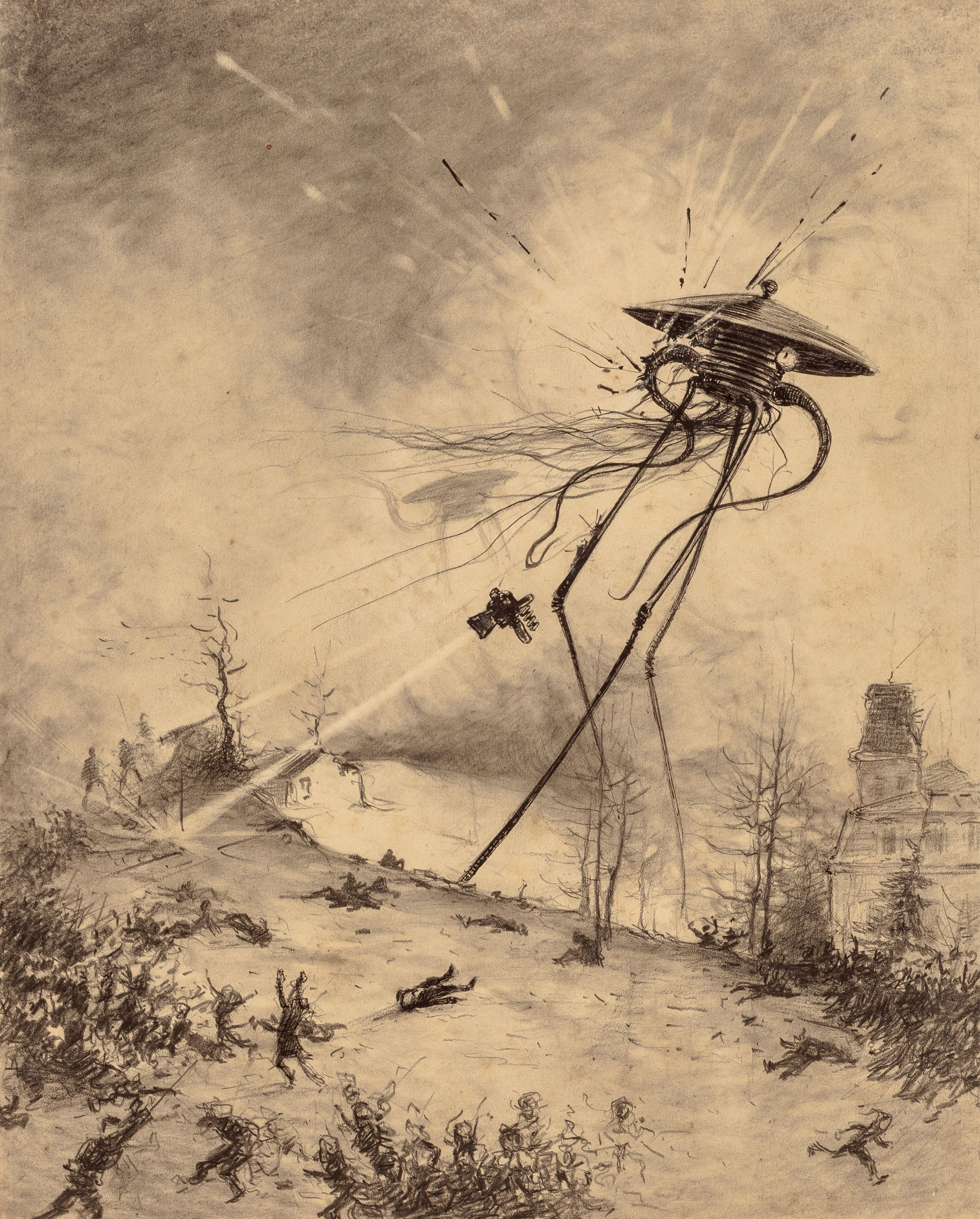 Illustration by Henrique Alvim Corrêa for H.G. Wells "The War of the Worlds" from 1898. Early on, Wells described the idea of an enormous heat-generating ray gun.

In the latter half of the 19th century, popular authors like Jules Verne and H.G. Wells wrote novels whose plots were based on highly imaginative projections of the technological developments of their time. Inspired by the scientific triumphs of their day, such as the discovery of X-rays and radioactivity, they ‘invented’ the literary genre of science fiction. In his 1898 novel The War of the Worlds, Wells developed the notion of a mobile weapon capable of generating and emitting an enormously powerful heat ray. In the book, invading Martians deploy these firearms to devastating effect after their landing on Earth. In a striking anticipation of miniaturization, this later became the hand-held ray-gun wielded by comic-book heroes like Buck Rodgers and Flash Gordon in the 1940s, which continues to make regular appearances in various guises on page and screen. The era of the Cold War and the development of the laser also saw the inception of manned spaceflight. This constellation in turn sparked ever more extravagant visions of extraterrestrial exploration (and mayhem!). Of these, the Star Trek and Star Wars series, with their plasma sabers, laser cannons and photon torpedoes, are undoubtedly the best known.