View of the exposed section of the ancient meridian line of the Horolgium Augusti below the basement of the residential building in Via di Campo Marzio in Rome. | © Photo: Lalulpa

The installation known as Solarium or Horolgium Augusti was therefore a large-scale astronomical measuring station, which is also referred to as a meridian instrument or noon indicator and annual calendar. A horizontal meridian line made of bronze was inlaid into the ground plates of the Campus Martius. Modern research has shown that the noon shadow to be measured at the time of the winter solstice in Rome is about 65 meters from the obelisk. The meridian line marks the two solstice points, which are about 55 meters apart. Archaeological research has further confirmed that there were other bronze markings across the meridian line to divide it. Thus, the line was subdivided into the individual areas of the signs of the zodiac, which in turn have a 30° division for themselves. The shadow of the sphere of the obelisk thus showed the place of the wandering sun in the respective zodiac sign.

The exact information about it gave a spectacular excavation of the German Archaeological Institute at the beginning of the 1980s. In the run-up to the excavation, an attempt was made to reconstruct the location of the former site on the Campus Martius as accurately as possible. As a result, a spot excavation took place in the area now covered by housing complexes, during which the entire section of soil had to be iced in an elaborate procedure to prevent groundwater from penetrating. In an exposed area at a depth of about 6 meters under the cellar of a house in Via del Campo Marzio 48, the archaeologists actually came across a good 6.5 meter long section of the Augustan meridian line! The markings of the zodiac signs found there were inscribed in Greek, already the language of scholars at the time. On the western side the section runs from the zodiac sign of Aries ("Krios") at 19° to 16° Taurus ("Tauros"). On the east from 14° Leo ("Leon") to 11° Virgo ("Parthenos"). The distances of the degrees increase continuously from south to north from 19 to 30 cm. Since the site is located a good 1.5 meters above the Augustan ground level, it is assumed that the site was already destroyed during Roman antiquity and was reconstructed under the later emperor Domitian on the area that was now higher due to flooding of the Tiber. 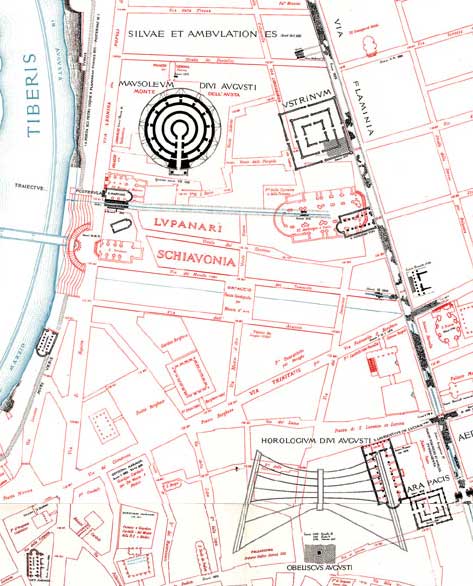 At the bottom right of the image, the map shows the original location of the Horologium Augusti and the Ara Pacis. (Source: Lanciani 1893-1901)

The Horologium of Augustus on the Campus Martius, which was originally located outside the gates of the ancient city of Rome, was embedded in an ensemble of interrelated representative buildings. In addition to the Mausoleum of Augustus, built during his lifetime, the complex referred to the original site of the Ara Pacis, the Altar of Peace of Augustus, which is now somewhat offset. The system of the whole complex, still discussed in research today, seems to have been so ingenious that on September 23, the birthday of Augustus, who was still born as Octavian and only received the honorary name of the "Exalted One" as emperor, the shadow moved exactly to the center of the visual axis of the peace altar in the course of this day, thus establishing a relationship between the propagated golden age characterized by peace and his princeps responsible for it.

The ancient installation on the Campus Martius, with its central element of the obelisk indicating the passage of time, which was transported from Heliopolis especially for this purpose, can be interpreted symbolically as a unique victory monument of Augustus triumphing over Egypt and his rival Marc Antonius: precisely a clock as a status symbol.

to the previous page