This sequence of images, acquired over a period of 10 minutes, shows a prostate cancer cell (labelled in with a green fluorescent marker) in the presence of the UV-activated motorized molecules. Note the blebbing of the cell caused by the puncturing of the membrane. Copyright: Robert Pal/Durham University

esearchers at Rice University in Houston have synthesized molecular motors that can kill cancer cells by drilling holes in them when activated by UV light.

It may be the smallest drill in the world, but it operates at speeds of greater than two million revolutions per second, and can puncture the plasma membranes of cancer cells. The nano-drill is a chemical machine made up of a single molecule, designed and characterized by a team of researchers led by James Tour at Rice University in Houston. Its synthesis and mode of action are described in a recent issue of the journal Nature.

The drill is powered by ultraviolet light, and is based on a light-driven, propeller-like structure previously described by the same team. “We thought it might be possible to attach these manomachines to cell membranes, and then turn them on and see what happened,” says James Tour. Each motor molecule is about 1 nanometer across and can be targeted to cancer cells. Having punctured the surface membrane, the machines could either destroy the cell entirely or deliver cytotoxic drugs into the cytoplasm.

The plasma membrane of biological cells can be up to 10 nanometers thick, but the new study shows that the rotation speed and the power developed by the molecules are sufficient to create pores large enough to allow much of the cytoplasm to leak out, effectively killing the cell. The whole process takes about a minute and, as Tour points out, it is highly unlikely that cancer cells could develop resistance mechanism against such a mechanical mode of attack. 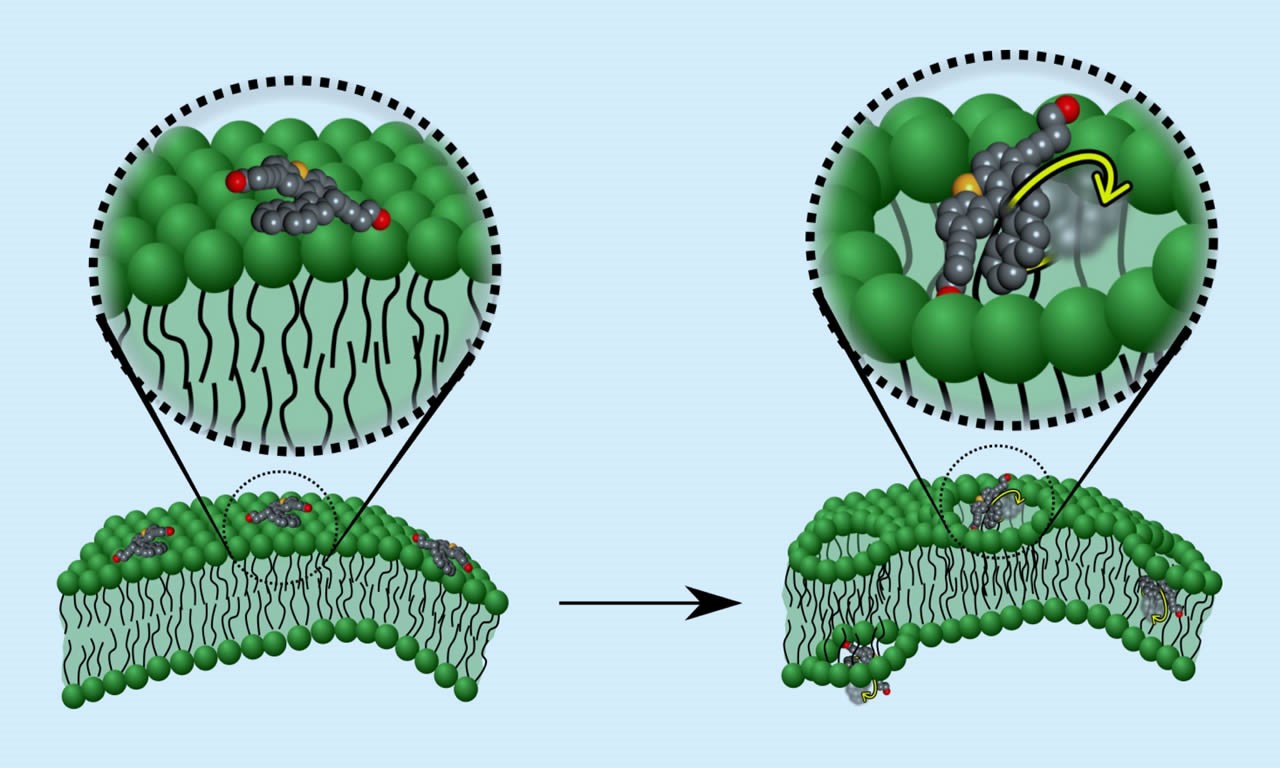 This schematic shows how the UV-activated nanomechanical action of the motorized punctures the cell membrane. (Credit: Tour Group/Rice University)

The drilling action itself is based on a principle first implemented in a compound synthesized by the Dutch chemist Ben Feringa, for which he jointly won the Nobel Prize for Chemistry in 2106. Chemically synthesized molecules capable of controlled unidirectional rotation were first designed in the 1990s. These molecules consist of a paddle-like rotor attached to a static arm. In most cases, as in the experiments carried out by Tour and his collaborators, the rotary portion of the molecule is attached to the stator by a deformable double bond. Upon delivery of pulses of electrical energy or exposure to light, periodical isomerization of the double bond causes the paddle to rotate. When rotation is activated by UV light, the nanomechanical action of the paddle results in the formation of pores and membrane bubbles (“blebs”). The extremely rapid rate of rotation prevents sealing of the membrane, thus allowing the soluble phase of the cell to leak out, effectively killing the cell.

A major advantage of the nanodrills is that they are optically driven. In principle, this enables them to be used selectively by exposing the target cells to UV light.