e owe our ability to see to the molecule retinal. In the human retina, a light-activated alteration in the structure of retinal triggers the neuronal reaction that is the basis of the visual sense. Bacteria also make use of the reaction to transport protons or ions across the cell membrane, which allows light energy to be stored and later consumed as a biological fuel. In all these cases, the retinal molecule is bound to a specific protein that plays a central role in modulating its response to light, which occurs within 500 femtoseconds. This is one of the fastest reactions in biology (1 fs is equivalent to a millionth of a billionth of a second). Researchers at the Paul Scherrer Institute (PSI) have now taken snapshots of what happens in this minuscule interval. “No one has previously measured the light-activated response of a retinal-binding protein with such precision,” says Jörg Standfuss, Leader of the Time-Resolved Crystallography Group in the Division of Biology and Chemistry at the PSI.

The study focused on bacteriorhodopsin, a retinal-binding protein found in unicellular microbes. The interaction of a single photon with the initially extended form of retinal in bacteriorhodopsin results in the formation of a kink at a specific site in the molecule. “Rather like a cat arching its back,” as Standfuss puts it. In solution, retinal undergoes a similar isomerization upon exposure to light, i.e. in the absence of protein. “Proteins can be regarded as factories in which chemical reactions occur with high efficiency,” says Standfuss, “and we wanted to look at how the interplay between this protein-ligand pair operates.” 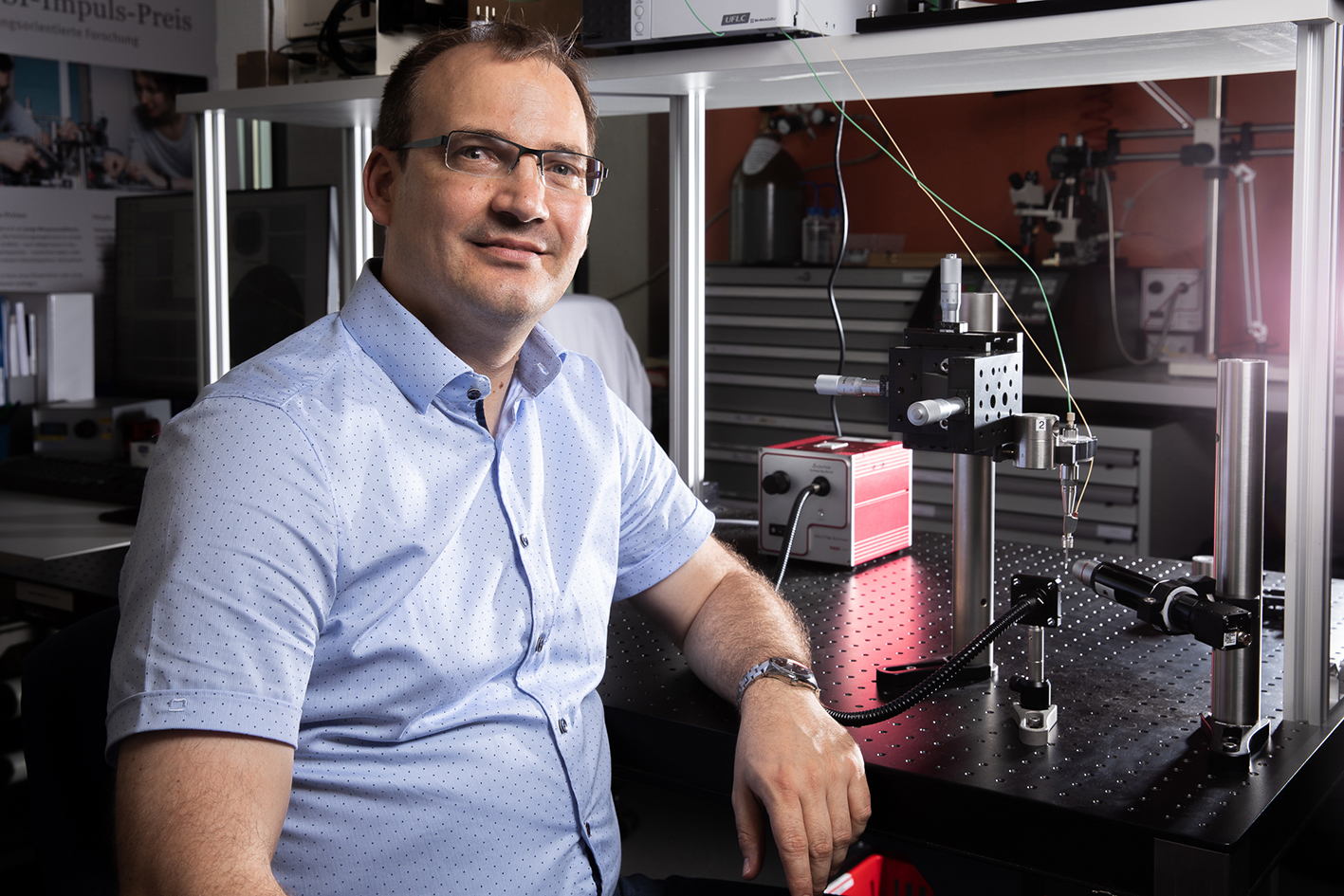 He and his colleagues discovered that water molecules in the vicinity of the bound retinal have a critical role in effecting the structural change. Thanks to the high temporal resolution made possible by the free-electron X-ray laser, they were able to observe how two water molecules are displaced to give the retinal room to adopt the kinked configuration. Returning to his feline metaphor, Standfuss describes this step as follows: “A cat normally arches its back in order to scare a rival away. But in this case, the second cat runs away before its opponent has had time to get its back up.” Computer simulations based on ultrafast quantum-based mechanisms confirmed the structural data.

Not all of the light that impinges on the complex is used to isomerize the retinal. Instead, the scientists found that activation of the ligand is accompanied by a veritable “protein quake”, as the excess light energy enhances the motions of the protein itself, and is thus dissipated in a safe, non-radiative fashion.

The experiments were performed at the Linac Coherent Light Source (LCLS), a free-electron X-ray laser (FEL) located in Stanford, California. In future, the team won’t need to leave home, as the newly commissioned SwissFEL is now in operation at the PSI. Free-electron lasers make it possible to probe protein crystals with a succession of extremely energetic and ultrashort pulses of X-radiation. The X-ray beam is deflected at various angles by the atoms in the crystal as it passes through the sample, producing a pattern of diffraction spots of varying intensities on a detector. The three-dimensional structure of the protein can then be deduced from an analysis of the diffraction pattern.

The team used crystals with dimensions of a few tens of micrometers, in which the bacteriorhodopsin molecules were embedded in an ordered array within a matrix of fat molecules. The crystal was then exposed to a short pulse of visible light to trigger retinal isomerization, and this was followed by a femtosecond pulse of X-radiation emitted by the free-electron laser. By varying the interval between the optical flash and the X-ray pulse, the researchers can follow the time course of the activation process.

The researchers will now use the SwissFEL to probe the response of retinal bound to the human protein rhodopsin, which is the light sensor found in photoreceptor cells in the retina. But retinal-binding proteins can be also be expressed in other types of nerve cells, which makes them responsive to light, and facilitates studies of their function. This approach has given rise to the new field of optogenetics. “Using retinal-binding proteins, one can in principle activate any region in the brain by means of light,” says Jörg Standfuss.

This text is based on press release issued by the PSI

Retinal isomerization in bacteriorhodopsin captured by a femtosecond X-ray laser