Scientists at the University of Florida have grown plants from the soil of Earth's satellite for the first time. A milestone in the exploration of the moon and space.

ur Earth satellite does not seem to be completely barren. Researchers at the University of Florida have now shown that plants can grow successfully in lunar soil. They also studied how plants react to lunar soil, also known as lunar regolith, which is fundamentally different from soil on Earth. Perhaps this is the first step toward making food supplies local on future lunar missions.

What happens when you grow plants in lunar soil, which is completely outside a plant's evolutionary experience? What would plants do in a greenhouse on the Moon? Could we do agriculture on the moon?

These were the questions posed by University of Florida horticultural researchers Dr. Rob Ferl and Dr. Anna-Lisa Paul. To answer them, the two developed an experiment: they planted seeds in lunar soil, added water, nutrients and light.

But what seemed simple at first turned out to be a complicated undertaking: The researchers had only twelve grams of lunar substrate available. The soil was on loan from NASA and had been collected during the Apollo 11, 12 and 17 lunar missions. Paul and Ferl applied three times in eleven years to work with the lunar regolith. 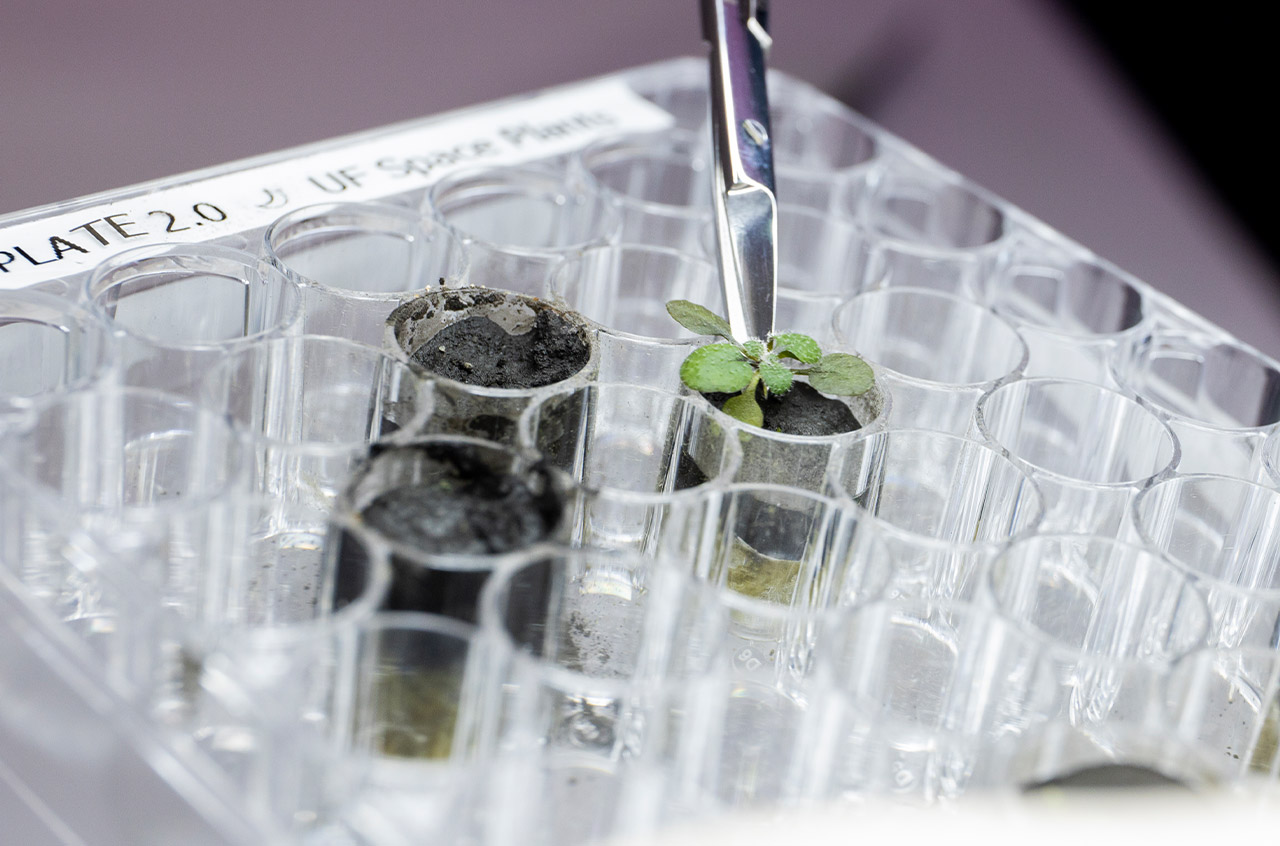 After filling the pots with one gram of moon soil, the scientists moistened the soil with a nutrient solution and added seeds of the Arabidopsis plant.

For their mini moon garden, the researchers used thimble-sized depressions in plastic plates normally used for cell cultures. Each depression acted as a pot. After filling the pots with one gram of lunar soil, the scientists moistened the soil with a nutrient solution and added seeds of the Arabidopsis plant. Arabidopsis is popular in plant research. Its genetic code has been completely decoded. Growing Arabidopsis in the Monderde gave researchers insight into how the soil affects the plants, right down to their gene expression.

The researchers were far from certain that the seeds planted in the monderde would sprout. But almost all of them did. "We were amazed. We didn't expect that," Paul says. "So the lunar soils don't interrupt the hormones and signals involved in plant germination."

For comparison, the researchers also planted Arabidopsis in a terrestrial substance that mimics real lunar soil, as well as in simulated Martian soil and terrestrial soil from extreme environments. The researchers observed differences between the plants grown in the lunar soil and the control group. Some of the plants grown in the monderde were smaller, grew more slowly or varied more in size than their counterparts.